Skip to content
-
It was 20 years ago this weekend that Eric Harris & Dylan Klebold walked up to Columbine with guns drawn, Eric under the influence of the antidepressant Luvox & Dylan under the influence of Zoloft & Paxil, according to a report from his good friend attempting to help him withdraw from the medications. When they were done suffering the antidepressant side effects of both suicidal & homicidal ideation, 12 students laid dead, along with one school teacher, plus Eric & Dylan themselves. The victims were Cassie Bernall, 17,  Steven Curnow, 14, Corey DePooter, 17, Kelly Fleming, 16, Matthew Kechter, Daniel Mauser, 15, Daniel Rohrbough, 15, Rachel Scott, 17, Isaiah Shoels, 18,  John Tomlin, 16, Lauren Townsend, 18, Kyle Velasquez, 16, and school teacher William “Dave” Sanders. To that list I would also add as victims Eric Harris & Dylan Klebold because they too were victims of these deadly drugs which caused them to not only take all of these lives due to the side effect of homicidal ideation, but suicidal ideation as well, thereby losing their own lives as well by their own hands. We do know that the most dangerous time and taking these drugs is an abrupt change in dose…so any increase or decrease as in starting the drugs, stopping the drugs, or switching the drugs. Eric complained of homicidal ideation in six weeks of starting on Zoloft, so he was switched to Luvox (Spell the name of an SSRI differently & you get a different reaction, right? WRONG!) & within two months of the Columbine shooting Eric’s dose of Luvox was DOUBLED!
Threat Against Columbine Repeated This Week
On Monday of this week Sol Pais,  an 18 year old girl, from Miami, FL, who was obsessed with Columbine & the shooters, flew to Denver, CO, bought a shotgun & ammo, setting off a frenzy with concern of another school shooting & resulting in as many as 1000 Colorado schools being shut down!
Woman ‘infatuated’ with Columbine, center of manhunt, found dead by suicide in Colorado, sources say
Article: Woman ‘infatuated’ with Columbine
It was Facebook posts like this drawing she had on her computer that concerned investigators when they already knew she was fascinated with the Columbine shooting. 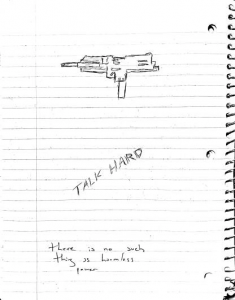 She was found at the base of a tree & her “body was still clothed in the same camouflage pants and black T-shirt, and she had a small duffel bag that contained two boxes of shotgun shells” all within arm’s reach & certainly not suitable for the cold weather.
April 20, 1999 – 20 Years Ago
The morning if April 20, 1999, I contacted Ruben Ortega, Chief of Police in Salt Lake City, to discuss with him the case of the Salt Lake LDS Family History Library shooting which happened 5 days earlier & had taken the life of my good friend Don Thomas. Don had been the security guard at the library for 28 years. Don & I had many long talks in the lobby of that very library about the dangers he was facing as a result of so many in Utah using antidepressants. I urged him over and over to be extremely careful in his position. I explained that as those on these drugs lose the memory of who they are they often turn to family history in an attempt to recall any memories to bind them to their loved ones. Sadly Don learned that lesson first hand that morning as he lost his life along with a woman who was a guest at the library before Salt Lake City police arrived shooting and killing the shooter 70 year old Sergei Babarin.
Local media quickly reported that Sergey Babarin was schizophrenic, something he has never been diagnosed with and was not being treated for. This was especially a far reach when General Lee those suffering schizophrenia are diagnosed in their late teens or early twenties, not in their 60s or 70s! I owed it to my friend to learn the truth and do what I could to get that truth about his death out to the public and his family. My suspicions that this was an antidepressant-induced psychosis we’re quickly confirmed as the shooter’s son spoke to the media setting them straight on his antidepressant use. I soon met Sergei’s son let me know that his father had noticed his antidepressant what’s causing him the lose his eyesight just as we would later hear about the Germanwings pilot who flew 150 people to their deaths when he slammed a passenger plane into a Mountainside in the Alps.
Because of his rapidly deteriorating eyesight, Sergei had abruptly discontinued the use of his antidepressant unaware of the extreme dangers of making abrupt changes to the dose of the drug.  There were not and still are not any warnings about the drug withdrawal state known as REM Sleep Disorder – a condition we now know that 86% of those being diagnosed with this deadly sleep disorder, in which you act out nightmares in a sleep state, were found to be taking antidepressants. Yet before we learned that this was generally known as a drug withdrawal state. But now in knowing that u65 of those diagnosed with this deadly sleep disorder are currently taking an antidepressant, how high could it be for those in abrupt withdrawal from one of these drugs since in the past this was known mainly as a drug withdrawal state?! This is why behavior on these drugs is so very much the opposite of what the individual would normally do. Why it is the best moms who kill their children, the best firefighters who commit arson, etc. This is information that should be headline news about these drugs & the very first warning given to a patient being prescribed an antidepressant!!!
As I explained all of this to Chief Ortega he brought up another recent case from January of 1999 at the Triad Center in Salt Lake City where a woman ran in with the gun and shot two people. One of those shot was a pregnant woman who lost her baby. Article: Triad Shooting