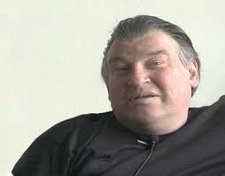 The Picture Above is Frank After and This is Frank Before

to Healthy in Only 42 Days!

So many of you were disappointed when I reposted the blog on the amazing transformation of Frank Ferrante in the movie “May I Be Frank?” because the link to the free viewing of the movie had expired. Well today I got an email from Food Matters who are offering a free viewing of the movie for the next 48 hours beginning this morning!!! So I am encouraging all of you to watch it to see the amazing changes one can make with diet and other alternatives in such a short time. Keep in mind that Frank not only had been on Effexor for 10 years, but during the same time period he also was being treated with Interferon for Hepatitis C, and I think he was also being medicated for diabetes. The Hep C was gone in 23 days! You will witness an incredible change first hand and Frank will keep you laughing through most of it.

(WORD OF CAUTION: If you are not accustomed to a NY Italian’s rough language, get ready to ignore it and watch the miracle of Frank becoming who he says is the person he came here to be!!) Our original post on Frank’s story is posted below.

(ALSO BE CAUTIONED THAT FRANK DID NOT COME OFF HIS EFFEXOR COMPLETELY DURING THIS TRANSFORMATION. WE WILL BE SPEAKING WITH ONE ANOTHER SOON TO SEE JUST HOW HE WAS ABLE TO DO THAT AND HOW LONG IT TOOK HIM. PLEASE CONTINUE TO ENCOURAGE THOSE CONSIDERING WITHDRAWAING FROM AN ANTIDEPRESSANT TO DOWNLOAD MY MP3 “HELP! I CAN’T GET OFF MY ANTIDEPRESSANT!” ON HOW TO DO SO SAFELY BEFORE MAKING ANY CHANGES IN DOSE: https://store.drugawareness.org/product/help-i-cant-get-off-my-antidepressant-mp3-download/ )

Have you watched Part 5 of the workshop yet?

If not, click here to watch part 5 now! Then click the link in the upper right hand corner where it says “Watch Now”

There are such valuable insights during this part of the workshop, as we discuss more of the emotional side of cleansing and health journey. We can’t cleanse our bodies without cleansing our emotions, and both are incredibly valuable.

Make sure to check out my fun and inspiring chat with Frank Ferrante. Frank has a truly unique perspective on life and health and has come so far in his journey.

We want to thank you so much for joining us for this workshop, and also want to commend you for taking the time to educate and inspire yourself to live a healthier life.

So now you might be wondering, “How how do I put these learnings into action?” This can be the most difficult part of the path because we often don’t know what to do next!

Our 7 Day Food Matters Cleanse is the perfect next step for you, if you are ready to start rebalancing your body and removing toxins that are holding you back from experiencing ultimate health and vitality.

It’s so easy to let our health be put on the “backburner” and not realise that we are robbing ourselves and those we love of our best self. I often think back and wonder where my father would be today, if he had not taken action and made his health his #1 priority! It’s kinda scary to think about…

“DON’T THINK IT CAN’T HAPPEN TO YOU OR SOMEONE YOU LOVE. IT HAPPENS ALL THE TIME.”

Hi. I’m so glad somebody with substantial medical credentials is putting forth this information. I’ve been resisting these drugs for years, despite “Doctors” attempts to cram them down my throat at every opportunity. I will briefly relate part of my story, then I have an observation about your website I’d like to address.

My first experience with these so – called “medications began with Paxil. I took one half of one pill and an hour and a half later I was hallucinating much like when I used to use psychedelics many lifetimes ago. I know what a psychedelic experience is. I knew then something was really wrong. I was in another universe altogether. Add to that the shakes and a horrible feeling I had taken an awful poison. Several years later, I tried Zoloft.

I could never take more than a tiny chip off of a pill, and could never stand more than a few days at a time. I was thoroughly stoned, drugged, and useless for just about everything. When I questioned my “Doctor” he would sort of mumble something under his breath and it became clear he didn’t want me as a patient. I was a troublemaker.

I had been diagnosed with Hepatitis C, by the way. I got myself into recovery from alcohol addiction, and was clean for six years. But I was seriously fatigued, and sick, so I went to a new “Doctor” who gave me Ritalin to combat that and depression. Not understanding the ramifications, I began taking it. Three months later I was in narcotic addiction hell, weak and jaundiced, malnutrioned, psychotic, and well on the way to dying.

I didn’t go back to that doctor, as I knew it was his intention to switch me to another drug and I knew in my desperation I might take it. I did some research and discovered that Methylphenidate is directly Hepatatoxic, and suppresses the immune system to boot, aside from all the other harmful effects. The “Doctor” has simply shuffled me off to die, me being one of society’s throwaways. It was hell to get off that drug, but I did. The “Doctor” was fully aware of my sobriety at the time. He didn’t care. I know a drug pusher when I meet one, and the only difference between him and the guy on the street is he does it legal.

I bring this up because it is becoming popular for Doctors to prescribe drugs for Hep C patients. I did research on my disease, discovered nutrition, herbs. I went to new “Doctors” and tried to share my information. How naive I was. They didn’t want to know, didn’t want to have anything to do with it, or what I now knew. Now, I am on my own, salvaging what’s left and hopefully getting better. I take from this one positive outcome. I know now that you have to take the responsibility into your own hands.

But I want to say one thing. I haven’t read everything on the website, but it seems taken for granted that it’s aimed at those who have a choice. That’s not always the case. I have to relate a story on behalf of someone very dear to me. I have a very close long time friend, my spiritual advisor and a nun, who has always had poor health. She was prescribed Xanax some years ago. One night, she went to the emergency room to get a hospital bed because of physical pain. She made a comment concerning Christ’s pain and her pain. They declared she was a “dangerous” individual, and involuntarily committed her to the state insane asylum for some months and forced drug injections into her. I visited this place, and what a hell hole it is. She is out now, but must involuntarily continue the injections against her will under threat of further incarceration. I am trying to figure a way to get her out of this situation, as I see the damage being done. It’s disgusting.
If they can do this to a nun, for God’s sake, they can do it to anybody. DON’T THINK IT CAN’T HAPPEN TO YOU OR SOMEONE YOU LOVE. IT HAPPENS ALL THE TIME. There is no help, no recourse for these poor people. They’ve been forgotten.

I have learned to be very careful and guarded when in contact with “health care professionals.” I get the impression a lot of them are on these drugs. What insanity it has all become and where will it end. Thank you Dr. Tracy and associates for giving a voice to all this that can’t easily be dismissed.

This is Survivor Story number 22.
Total number of stories in current database is 34