This was my comment to someone who posted on this article that this guy is a poster boy for Republicans…why is everything centered around politics?! We all focus on our insane politics while the country is completely falling apart from these drugs!
“PlaneGeek he is a poster boy for demonstrating how no one involved in these cases is looking at the toxic effects of the so called “antidepressant” drugs that are causing most of these violent psychotic breaks! This country’s legal system is INSANE! Look at what they have done to this guy in their attempt to DRUG him into competency!
He looks like he already got the death penalty & they are just gradually drugging him to death. (See the before & after photos) No wonder the psychiatrist over the Colorado prison system there contacted me right around 2003 wanting me to get him through to the press to talk about how he would wean guys off these psych drugs they did not need & the prisons would put them right back on them! Yes, they too get Pharma kickbacks just like doctors do. Everyone seems to be on the take.
Those crazy eyes you see there are called “Prozac eyes” in medical research. He was psychotic enough at the time of the crime to be declared incompetent. Does he look more competent to anyone now that they have drugged him half to death?”
With an arsenal as big as he had in committing this crime & as drugged as Colorado Springs became after Columbine it was clear to me this was yet another drug-Induced case as SO MANY  others in that area have been!
https://www.dailymail.co.uk/news/article-7773643/Planned-Parenthood-shooter-Robert-Dear-indicted-68-federal-charges.html?ito=native_share_article-masthead 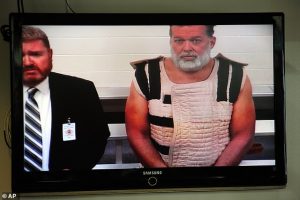 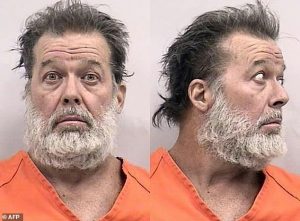