Paragraph one reads:  “A New Brunswick man accused of a
violent assault Friday will undergo a psychiatric
assessment.”

social worker, informed him that Goodine has been diagnosed with a chemical
imbalance and takes medication for
depression.”

A New Brunswick man accused of a violent

Corey Thomas
Goodine, 35, appeared briefly in provincial court Monday to face a Nov. 13 count
of aggravated assault, alleging an attack on a minor.

Duty counsel Joseph
FitzPatrick asked the court Monday to send Goodine for a 30-day psychiatric
assessment to determine if he’s fit to stand trial or might be exempt from
criminal responsibility for his alleged actions.

He said Goodine’s
sister, a social worker, informed him that Goodine has been diagnosed with a

Goodine will return to court Dec. 16.

After an
incident at St. Mary’s First Nation on Friday, an arrest warrant was issued for
Goodine.

He turned himself in later that day in Perth
Andover.
.

Paragraphs 20 through 22 read: “Her fiance told the court they were arguing because he disapproved of her drinking. A Type 1 diabetic, Maitland was also taking medication for anxiety and depression.”

“She said she had not taken her scheduled insulin that night. She told the judge that the medication she’s taken for seven years to treat anxiety and depression affects her memory.”

“‘It makes things a little more fuzzy,’ she said.” 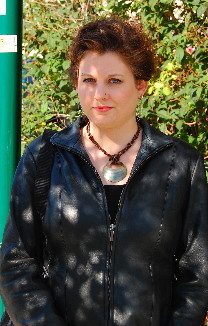 SOMBA K’E/YELLOWKNIFE – A woman accused of assaulting a police officer told a judge Thursday that after responding to an RCMP officer’s request to see her bleeding wrist, he pepper sprayed her, and dragged her to a police cruiser by her hair.

Ebony Maitland is accused of mischief and assaulting a police officer after her blood made contact with an officer during her arrest on July 6, 2008. – Elizabeth McMillan/NNSL photo

Thirty-year-old Ebony Maitland is also on trial by judge in Territorial Court for a charge of mischief.

The assault charge stems from an allegation by police that when she extended her arm, she flicked blood onto RCMP Const. Phil Unger’s face, who was standing about a metre away.

The woman told Chief Judge Brian Bruser she had cut her arm in two places after smashing it through a window during a night of heavy drinking and arguing with her fiance.

During cross examination, Crown prosecutor Diane Keats did not dispute Maitland’s claims about the pepper spray, and being dragged into the police cruiser by her hair, but questioned the accused’s memory about the nature of the interaction between herself and Unger and the manner in which she moved her arm.

Maitland said she recalled being told she was under arrest for causing a disturbance when Unger asked to see her injury. She said she extended her arm with her palm facing upwards.

“He wanted to know how bad it was,” she said. “We didn’t have a conversation. He just asked to see my wrist.”

Unger and another RCMP officer, Const. Jarret MacDonald, responded to a call of a domestic disturbance at Ptarmigan Apartments on July 6, 2008 at around 5 a.m., according to Keats. Maitland was in the parking lot when they arrived, said the prosecutor.

The five-foot-seven, 150-pound woman was barefoot and wearing only shorts and a T-shirt when she was arrested.

Maitland said she was pepper sprayed again while she was sitting in the back of the police cruiser. Keats said it was because Maitland was yelling and smearing blood from her injury on the inside of the vehicle.

The prosecutor said Maitland was behaving aggressively – screaming, swearing and waving her arms in the air when Const. Unger tried to arrest her.

Maitland told the court that Const. Unger threw her against the cruiser before forcing her into the vehicle. “They opened the door and threw me in head first … then they kicked me in the butt,” she told the court.

Keats asked for details about the hours leading up to the parking lot altercation and the soft-spoken woman said she didn’t remember much of the evening.

She told the court she’d been to the Raven pub for several hours that night.

An ambulance attendant testified she told him she had consumed 12 beer.

Keats told the court the two officers had previously responded to a call to the woman’s apartment that evening where Maitland and her fiance were fighting loudly.

Maitland testified she had no memory of their initial visit.

Her fiance told the court they were arguing because he disapproved of her drinking. A Type 1 diabetic, Maitland was also taking medication for anxiety and depression.

She said she had not taken her scheduled insulin that night. She told the judge that the medication she’s taken for seven years to treat anxiety and depression affects her memory.

“It makes things a little more fuzzy,” she said.

The fiance said Maitland was extremely intoxicated and he’d been unable to control her. He became flushed and cried as he told the court about watching Maitland interact with the police after she’d been pepper sprayed the first time.

“I couldn’t believe what I was witnessing,” he told the court. “He lifted his boot and kicked her in the butt and started laughing to the other officer.”

An ambulance arrived after Maitland was restrained in the police cruiser. The fiance said he told the driver of the ambulance about Maitland’s medical condition.

Another ambulance attendant, Craig MacLean, testified Maitland resisted treatment, and was swearing and spitting as he tried to assist her.

When questioned by defence lawyer Jay Bran, MacLean said her combative attitude may have been caused by her diabetic state.

When asked about her behaviour in the police cruiser, the ambulance and the hospital, Maitland said she was confused and couldn’t see because the pepper spray had gotten in her eyes.

“I’m not really sure what I was doing because I couldn’t see … I was yelling and screaming because I was in pain,” she said. “My head hurt, my neck hurt, my throat, eyes (and) nose were burning,”

She said she regained her vision after a doctor treated her at the hospital. The injury to her wrist required eight stitches.

After being treated at the hospital, Maitland spent more than eight hours in the drunk tank.

She testified she later received medical attention for an injured toe, which she said was broken by one of the police officers during her arrest.

Maitland said she couldn’t work for two weeks because her job as a cleaner at the hospital required her to be on her feet for long periods of time.

The trial had originally begun April 2, but was adjourned until Aug. 26 and continued until last Friday. The trial resumes Sept. 11.