Thinking about stopping your medication cold turkey, switching medications, starting Seroquel or any other serotonergic drug???? Read this current ongoing triple murder case and think again!!!!! You may also want to visit our Facebook group “Seroquel (Quetiapine) Should Be Illegal”

The second article is an interview with his grandfather who talks about the drug and alcohol problems Derek had previously and a fairly recent divorce. Keep in mind that antidepressants which produce terrible insomnia are very often prescribed after a divorce. So the Seroquel could have been prescribed for insomnia he developed from an antidepressant given to cope with the divorce. If so the Seroquel could have been his second exposure to a serotonergic medication and he could have been suffering insomnia, for which the Seroguel was prescribed, from the rapid withdrawal of the antidepressant. These drugs and their impact upon serotonin levels accumulate in brain tissue and each exposure produces more and more intense adverse reactions.

His grandfather also included the information that the elderly woman he killed first was a family friend he had done odd jobs for his entire life.

[I have left out the extremely graphic parts of this first article for you…others can read the article for the rest of the story including cannibalism.]

Always remember that a safe withdrawal is a gradual withdrawal & as you will see there is very good reason why the FDA issued their warnings on withdrawal from these serotonergic medications as potentially inducing suicide, hostility and psychosis. Rapid withdrawal is most definitely not worth the risk of going into a REM Sleep Disorder (where 80% hurt themselves or someone else), a manic psychosis or any other type of psychosis….. 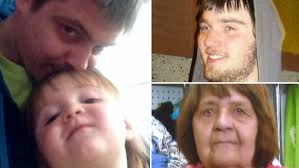 Killed in this case were Terry Blanchette, 27, and his two year old daughter Hailey and Hanne Meketech, 69, who was killed five days earlier than Terry and his small daughter. All of these killings were very brutal deaths which included no guns.

Abrupt withdrawal from any serotonergic medication can produce this type of impulsive murder, as well as suicide, as a patient slips into a REM Sleep Disorder which can appear months after the abrupt withdrawal. REM Sleep Disorder has long been known to produce both murder and suicide in a sleep state as the patient acts out nightmares.
It has been my experience in dealing with the adverse effects of these drugs that increase serotonin that all of them can produce this deadly sleep disorder. But the majority of the drugs involved have been the serotonergic antidepressants. Research indicates that 86% of those being diagnosed with this extremely deadly sleep disorder are currently taking antidepressants even though the REM Sleep Disorder has long been known as a drug withdrawal state.
The big problem with all of these new so called “atypical” antipsychotics like Seroquel, Zyprexa, Abilify,  Risperdal, Geodon, etc. is that they are like a combination of an SSRI antidepressant mixed with an older anti-psychotic. So, you get similar adverse effects to these drugs as you do the antidepressants.
I do know that after testifying in these cases & documenting them for 25 years this drug-induced nightmare we are living in needs to end!!! I hope family members on both sides of this tragedy hold the drug maker responsible for these senseless deaths!!!
In a hearing in 2008 I presented testimony before the FDA on this deadly drug. We also have a Facebook group titled “Seroquel (Quetiapine) Should Be Illegal.” And there is a similar Facebook group for each of these atypical anti-psychotics and antidepressants.

From the article posted below this we read: “….he had stopped taking Seroquel – an antipsychotic medication – which he said he had been on to help him sleep. [PLEASE NOTE The prescription of this antipsychotic drug was for sleep, NOT psychosis! The psychosis was the result of the abrupt withdrawal from the drug.]

Saretzky said he had stopped taking the medication a few months earlier, adding, “Everything’s been a real blur since then.”

McCauley then asked about something Saretzky’s father had said about talking to the devil.

“[The devil] takes control of me sometimes and I don’t know how or why,” Saretzky replied…. [Even atheists have reported to me for years now that they feel possessed on these drugs or that someone else’s brain is in their body.]

He said that he had dated Cheyenne Dunbar, Hailey’s mother, after Hailey was born, but that he ended the relationship when he chose a friend over her. McCauley asked if Saretzky felt like Hailey’s step-dad, to which he responded, “Kinda I guess.”

As McCauley directed the conversation to the murder of Blanchette, Saretzky said, “I don’t even remember going to Terry’s house,” then saying, “God did it, not me. God did it himself.” [The going in and out of consciousness as one acts out the dreams or nightmares they are having.]

After continuing to deny that he played any role, Saretzky finally broke down… [Often the patient is not even sure what they have or have not done on the drug and it takes a lot of the puzzle pieces placed in front of them for them to realize that what they remember only slightly as a nightmare was reality.]

“Think I’d have a chance if I plead insanity?” Saretzky asked, after first inquiring if he might spend the rest of his life in prison. McCauley responded that it wasn’t something he had control over. [PLEASE note that the patients have always reported they had no control over their actions. I still remember young Kip Kinkle screaming over and over to police after committing one of the first school shootings on Prozac and Ritalin, “I had no choice!!!!” when he was being questioned about killing his parents and shooting classmates.]