Skip to content
-
Listen tonight to Columbine Survivor Mark Taylor & Ann Blake-Tracy on the Jeff Rense Show
Listen here 7pm PDT
When the Columbine massacre happened 22 years ago today I naively thought it would have been shocking enough & the cause obvious enough to wake the world to this drug-induced nightmare of mass shootings. But over two decades later we have just finished a 5 week period where at least 46 people have died in mass shootings here in America. We already have almost enough evidence to link antidepressants to everyone of those killings.
One who has fought this battle for the truth behind this nightmare for all the school shooting victims is Mark Taylor. Mark was dubbed the “Columbine Wonder Boy” by the Colorado media after surviving 6 – 13 bullets from Eric Harris’ gun that day as he & his friends sat discussing scriptures on Columbine’s front lawn. After arriving at the hospital the attending doctor called Mark’s family physician & said, “I have one of your patients here. He is dead but he is talking to me!” 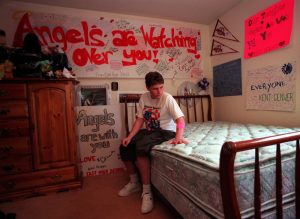 Mark & his mother asked me to help them as an expert in his case filed against the makers of Luvox (Who are now attempting to gain approval of Luvox for treatment of Covid 19!!!!) We traveled, lectured, & did media nationwide on these drugs for years, until Mark gained  too much attention when he gave a very powerful testimony before the FDA in the 2004 hearing on antidepressants increasing suicide in children.
I firmly believe at that point Pharma decided it was payback time for Mark speaking out. They apparently felt they had not brought in enough money on these drugs, nor screwed up enough lives around the world as yet with the drugs, so they moved to shut both of us up in any way they could.
What I went through was nothing in comparison to what Mark has been made to suffer. First his court case was destroyed by his attorney not meeting a deadline. Then the drug maker, in conjunction with it appears to be his new attorney (an ex-Pharma attorney professing a change of heart in representing Pharma),  called a surprise settlement hearing as soon as Mark had his 21st birthday. He was made to believe he would go to jail if he did not sign their proposed settlement offer which gave Mark nothing but a promise that the drug maker would pay $10,000 to a charity of his choice! Mark chose a cancer charity, which would, of course, go right back into Pharma’s pocket!
Mark’s mother who was on the lawsuit with him had not even been allowed into the room for the settlement but was outside the doors with Denver Post reporter Howard Pancratz for most of the day waiting for Mark. I even spoke with the attorney over the phone to point out that legally Mark could not sign the settlement because he laid outside Columbine for 1 1/2 hours bleeding to death from those 6-13 bullet holes in him. With that much blood loss you have brain damage from the loss of oxygen to the brain resulting in a set back in brain development. That technically would ha e made Mark more like an 18 or 19 year old in his judgement when by law you must be 21. But they did it anyway.
Then they got someone to accuse him falsely of making a threat when he went  to a Borders Book store near his home to check on sales of his book. That got him put in a psych hospital where he was placed on the same drugs he had been testifying against for years! That was even though the head of that facility,  a psychiatrist we knew, understood there was no reason for him to be there or to be “medicated”! Since then he has been moved from one place to another in Colorado & Arizona. They have now had him on the drugs for 12 years he was fighting against! Sadly our world has a history of doing this to whistle blowers but we also have laws about the illegality of doing so!
Ann Blake Tracy
Here is Mark before & after what they have done to him…
Before…Giving FDA testimony
https://youtu.be/2c5p–O7Bn0
Just before being thrown in a psych ward
https://youtu.be/uv9_GixFM0A
After https://youtu.be/xQ8zRjswZyk
Mark’s full story is shared here in video:
“Mark Taylor’s Fight for Columbine”
Evidence antidepressants are the cause of mass shootings…
https://www.drugawareness.org/school-shootings-the-evidence-antidepressants-are-the-cause/