Sharing with you one of my most favorite plants. I am excited that I just harvested a large bag of mallow leaves – one of my most favorite greens of all & by far the easiest to grow as it needs ZERO upkeep! And thought it was time to share some of my lifestyle which has kept me out of a doctor’s office for 45 years. Sadly far too much of this kind of wisdom has been lost to our society. But it amazes me that some of the greatest super foods & healing herbs & nutritious plants God has made the easiest to grow & most prolific like Aloe Vera & Mallow. And some grow so prolifically, even to the point that many think of them as “weeds” like the amazingly healing Dandelion,  and the best source of Omega 3 on the planet, Purslane.

“Mallow was an esculent vegetable among the Romans, a dish of marshmallow was one of their delicacies.” The Roman naturalist Pliny the Elder suggested that the use of mallow juice on a daily basis prevented any type of illness. In the 16th century Europe, it was said “to soothe whatever ails you” and was extensively cultivated and eaten as a leaf vegetable in pre-Han dynasty China.

Mallows are known to be one of the weeds brought to the Americas and much of the world by early European settlers. Because mallow grows prolifically and plentifully in unattended poor soils, it has throughout history been used as survival food in times of famine. 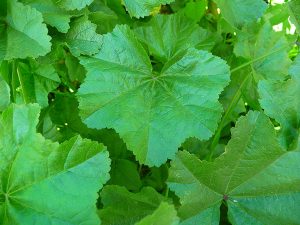 The leaves, stems, and roots of both types of mallow are very rich in a mucilaginous substance that has been used by herbalists worldwide as an ingredient in herbal cough medicines and lozenges to soothe the throat and eliminate congestion from the lungs. It is excellent for IBS & Chron’s disease!

Mallow leaves can be eaten raw or steamed and are quite high in minerals and some vitamins.

The real magic of the mallow plant, however, comes from its beneficial polysaccharide and antioxidant compounds including phenols, flavonoids, carotenoids, tocopherols, and ALA fatty acids, all of which contribute to its world-renowned properties as a gastrointestinal and anti-inflammatory herb.

Marshmallow (Althaea Officinalis) comes from the Greek word “malakos”, which means “to sooth.” The leaves of Malva or mallow are soft to the touch and are likewise very soothing and calming to the digestive tract.

Common malva leaves are demulcent in nature and contain a beneficial mucilaginous polysaccharide that helps to soothe and coat the entire gastrointestinal tract forming a protective film.

This substance provides actions as a gentle laxative but is also helpful for softening excess sticky mucus and removing it from the body. The root extract is used extensively in herbal cold formulas to clear out and expel phlegm build-up in the lungs and sinus passages.

For those with an acid stomach, a smoothie or tea infusion made with mallow can provide much relief and help to further balance pH by increasing alkalinity. The leaves are additionally rich in pectin, chlorophyll, fiber, vitamins A and C as well as calcium, magnesium, iron, selenium, and potassium. As a natural diuretic, mallow leaves can assist in increasing urine flow and help to rid excess fluid and salts without reducing potassium levels, a common side effect of many diuretics. Malva also provides relief when recovering from urinary tract infections. 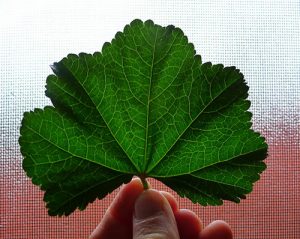 Used as an Anti-inflammatory

Malva leaves have been used for centuries all over the globe for their ability to reduce and cool inflamed conditions. Used both topically and internally the abundance of mucilage found in all parts of the plant offers relief for joint inflammation as well as various skin issues. Consumed as a food, it is a very good dietary supplement for restoring damaged skin tissue and excellent for healing wounds, bruises and especially burns.

As with some other superfoods, like aloe vera, the effects of the polysaccharide-rich gel are furthermore exceptional for relieving and healing conditions like peptic ulcers or ulcerative colitis.

According to one 2012 study published in The Journal of Pharmacy and Pharmacology, “The leaves, in particular, have been reported to have potent anti-inflammatory, antioxidant, anti-complementary, anticancer and skin tissue integrity activity. Additionally, an anti-ulcerogenic effect was recently proven, demonstrating that the aqueous extract was more effective than cimetidine, a potent medicine used to treat gastric ulcers.”

One of the best ways to consume mallow leaves is in a green smoothie as it provides a thick quality to your drink and any “wild green” flavor is masked by the addition of sweet fruits. Older mallow leaves are a little less palatable than young tender shoots and can have a tough fibrous texture that is best camouflaged into such drinks.

The smaller young leaves are delicious chopped up into salads or raw soups, while the bigger leaves can be pressed through a juicer in juicing recipes or lightly steamed, like spinach, as a green leafy vegetable.

When mallow leaf is heated in hot water it can increase the thickness of soups and stews. It is beneficial to use ginger root or powder with mallow to help encourage its mucus clearing expectorant properties.

You can also eat mallow flowers. They are a bright and colorful addition to most any entree, side dish or even dessert decoration.