Tuesday afternoon, May 7, 2019, just two weeks after the 20th anniversary of Columbine, two suspects were arrested after opening fire in a K-12 school shooting that is ongoing. Little is known yet as to casualties. I just got off the phone notifying Mark Taylor that 20 years after he took 6-13 bullets at Columbine while he was living in Highlands Ranch there is a school shooting going on there. And both of us are shocked that there is still little to no public knowledge about the antidepressants being behind the large majority of these shootings.

Here is the original article discussing what we know so far: 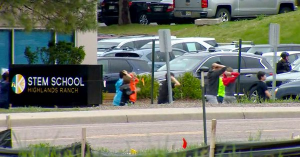 Here is a list of school shootings over about a ten year period:

And at this link below you will find:

#2 Mark Taylor’s powerful 3 minute testimony to the FDA about this in 2004.

#4 Mark’s story as to Pharma’s payback for him for suing them to get this information to the public. The price he has had to pay is beyond belief!

SCHOOL SHOOTINGS: The Evidence Antidepressants Are The Cause