Aspiring Pastor Accused of Killing Wife in His Sleep Blames Cold Medicine: ‘I Can’t Believe I Did This’

A 28-year-old North Carolina man is facing a murder charge after allegedly stabbing his wife in bed — but the newlywed claims he doesn’t remember carrying out the alleged crime because he might have done it in his sleep, PEOPLE confirms.

“I had a dream and then I turned on the lights and she’s dead on the floor,” he says in a 911 call obtained by PEOPLE. “I have blood all over me and there’s a bloody knife on the bed and I think I did it. I can’t believe this.” 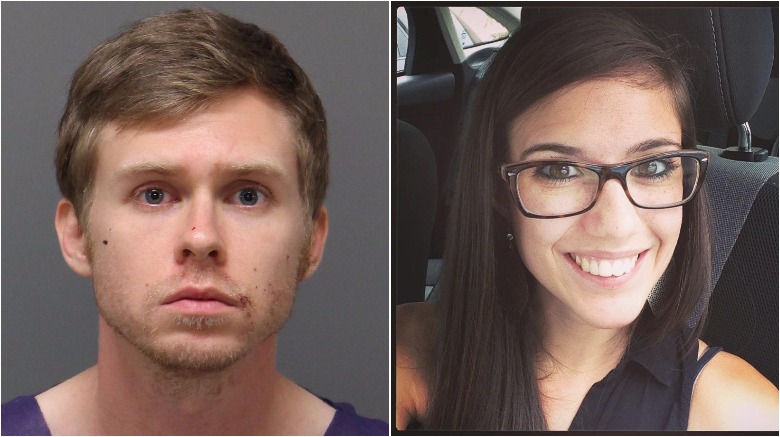 Warning went out to NC pastors in 2008

What is really extra sad about this is that my article Sorcery and Spirituality https://www.drugawareness.org/articles/spirituality-and-sorcery came from an article a minister, Rev. George Malkmus, at Halleluah Acres, in NC asked me to write for his followers back in 2008. This is an article I ask all the time for everyone to take to their church leaders so that they will have this warning from the scriptures about this terrible plague of these deadly drugs that we were told would deceive the whole world in our day and would be the cause of death for many.

#1 We now know the approval for these drugs was bribed.  “I indirectly contributed to the death of . . . people, whose shadows now haunt me.”…. Dr. John Virapen Listen to him confess that here: http://new.drugawareness.org/meet-dr-john-virapen-the-man-who-bought-prozacs-approval/

#2 But that was only the beginning of the deception. From there it has gotten worse with Dr. Candace Pert whose research made all these drugs possible coming out against them in 1997…I AM ALARMED AT THE SSRI MONSTER I CREATED…. http://new.drugawareness.org/i-am-alarmed-at-the-monster-ssrisnri-antidepressants-i-created-dr-candace-pert/

#3 The serotonin hypothesis is backwards – serotonin never was low in depression, anxiety, etc. Research demonstrated it was elevated in those disorders due to an inability to metabolize serotonin – exactly what antidepressants do – inhibit the reuptake (metabolism) of serotonin! As I explained at the FDA hearing in September of 2004: https://youtu.be/BS-OXxmtFaE?list=PLVC0WUxi0530sZYe8rvs-8fZwP0M-5xdG

September 2004 Mark Taylor & Spoke of Antidepressants on the 700 Club

After we finished testimony at the FDA and learned of the Black Box Warning to be put into place Mark Taylor, his mother, Donna, and I drove down the East Coast to Florida for a case I had there very similar to this young aspiring pastor which had been the result of cold turkey withdrawal from Effexor. On our way we stopped in NC to film a piece with the 700 Club which you can see on the video about Mark and his case against Pharma and the retaliation they have taken against him for speaking out – which has only grown increasingly far worse since the film was put together in 2013:  Mark Taylor’s Fight for Columbine:

We have been warning about cough medications and antidepressant use forever! The ingredient Dextromethorphan is a serotonin reuptake inhibitor and will magnify the adverse effects of these drugs while on them or in withdrawal from them. I would suspect one would need to avoid them for many years after coming off. Kids call this ingredient Dex and they have been getting high on it for decades. It can produce a PCP effect, but as most of you should now know all of these antidepressants can do that as well. If you have not yet spent hours on our main website to learn all the cautions you need to take, I would suggest you commit yourselves to do that NOW! Something like this is certainly not worth taking a chance on! But learn from this article on this deadly sleep disorder that 86% of these cases involve someone who is currently on an antidepressant or making changes in the dose of an antidepressant. It has long been known as a drug withdrawal state. We do not yet know if this young man was on an antidepressant, but NC has long been known for having one of the highest rates of use nationwide. So chances of him being on one or having been on one in the past are high.  If you look at this case out of Washington State you will see a REM Sleep Disorder explained by a young man who took a gun to school when he was 16 and held his classmates at gunpoint for 45 minutes and today, almost 20 years later still has no memory of it. He was being switched over from a year on Paxil to Effexor…

Article by Ann Blake-Tracy, from the book, Prozac: Panacea or Pandora? Our Serotonin Nightmare!
During normal REM sleep the muscles in the body become paralyzed and only keeps the necessary functions of the body working such as respiration, heart beat, etc. There are a small group of cells in the brain stem that control REM (dreaming sleep). When these cells become injured or diseased, people do not experience the muscle paralysis associated with REM sleep, which can lead to REM sleep behavior disorder (RBD)-a serious condition in which the afflicted violently act out their dreams.
In this sleep state known as RBD, people have been known, not only to drive, but to do things completely uncharacteristic of themselves such as fight like a military person although never serving in the military, become promiscuous, but also even to murder those close to them and to take their own lives in this sleep state. Murder and suicide have long been known to be a symptom of REM sleep disorder. This is an unconscious state without normal inhibitions and full of automatic behavior based on whatever dream you may be having.
This link http://www.oddee.com/item_96680.aspx will show you some of the MANY possibilities when you are acting out your dreams or nightmares while experiencing RBD. At drugawareness.org we have many of these types of cases which were induced by the use of antidepressants. Keep in mind that the most common side effect of antidepressants is insomnia, especially in withdrawal, so those in antidepressant withdrawal often have their chances of experiencing RBD increased by being prescribed drugs similar to Ambien.
http://www.3news.co.nz/Police-seek-urgent-ban-for-sleep-driver/tabid/423/articleID/308999/Default.aspx
Over 80% of those who go into RBD hurt themselves or others. I have one book I have written on RBD and am finishing up an ebook now. Although rare in the past we are seeing more and more of this deadly disorder. While drugs similar to Zolpidem (Ambien) are found in 3% of these cases what few are aware of is the research by America’s two foremost experts on this disorder showing that 86% of the cases they are diagnosing with RBD are patients currently taking an antidepressant. But because RBD has long been known as a “drug withdrawal state” the risk of RBD in antidepressant withdrawal or Zolpidem and similar drugs could be far greater!
The worst of this disorder is when it is a nightmare you are experiencing when you go into this sleepwalk state. For two decades I have listened to people repeat over and over to me after coming safely off an antidepressant, “I acted out my worst nightmare on this drug!” And, as I testified before the FDA, this previously rare sleep disorder of RBD is exactly what comedian Phil Hartman’s wife experienced when she shot her famous husband under the influence of two serotonergic drugs: Zoloft and Ultram (Tramadol).
Please note that there is a Facebook group antidepressant-induced REM Sleep Disorder at:
https://m.facebook.com/groups/106704639660883?tsid=0.32812305387480545&source=typeahead
Ann Blake Tracy, Executive Director, International Coalition for Drug Awareness
Posted in Recent Cases Blog and tagged Antidepressant Withdrawal, Dextromethorphan, Matthew and Lauren Phelps, minister, North Carolina, serotonin, spiritual warning.