From the  Levadopa package insert warnings we read: “All patients should be observed carefully for the development of depression with concomitant suicidal tendencies”

Of course this same warning comes with “any antidepressant ever approved by the FDA or any antidepressant to ever be approved by the FDA in the future” ….. the wording of such a comprehensive warning still rings in my ears as I stood in anticipation to hear the conclusion of the FDA Advisory Committee a decade ago. Sadly that warning was not comprehensive enough to save one of America’s most beloved comedians.

Today the toxicology confirmed all I said – statements I got a lot of flack for even from those who are suppose to know how deadly these antidepressants are! Several of Robin’s close friends have also said they thought these drugs caused his suicide. Now, according to the article below, we know that Robin Williams was on THREE prescription drugs that carry suicide as a warning!!! He was taking two antidepressants (antidepressants should never be given together due to the toxic effects of doing so) along with an anti-Parkinson drug also known to produce suicide as a side effect.

Just how much did they think he was capable of warding off those powerful mind altering effects?! After working these cases for 25 years I would say his family should not even hesitate in filing a wrongful death case in his behalf! He would not have had a chance on that combination of drugs! “Williams had two types of antidepressants in his system when he died, as well as a Parkinson’s medication, caffeine and another ingredient found in tea and cocoa, the autopsy found.”

In 1998 the world lost comedian Phil Hartman in a tragic murder/suicide. Pfizer, the makers of Zoloft, settled a wrongful death suit for their deaths brought against them by the Hartman children, Sean and Birgin. We also came too close to losing Jim Carey and Roseanne Barr to the same medications that took Phil from us – antidepressants. But just how similar was Robin William’s situation to that of singer Del Shannon who was lost to antidepressants in 1990?

Del Shannon (Charles Westover) died February 8, 1990. February 26, 1990 People ran a ridiculous article titled “Singer Del Shoots Himself, Leaving Others to Wonder Why He Ran Away” It went on to say, “For now, Shannon’s family and friends, like the character in the singer’s most famous song, can only wonder why.”

In September of 1991 I met Del’s wife, Lee Anne, after she had learned why she lost Del. We became fast friends when we both testified before the FDA Advisory Committee on Prozac induced suicide. We were to later learn that the members of that committee had major vested interests in the millions but were allowed to sign wavers stating that those funds would not influence their vote that day. And so the committee reassured the world that Prozac was not causing suicides as they ran home to count their money coming in from the drug makers.

From the beginning Del’s wife believed her husband’s death must have been an accident. “Del was too loving, too considerate a person to do something like this,” she says. “He would never do it, knowing it would hurt those who loved him.”

By the time we met a year and a half later she had learned his death was murder, pre-meditated murder via Prozac with the culpable parties being Eli Lilly and his family physician. Del’s career was beginning to really take off again and he was quickly reaching burn out. So he had gone to his family doctor who suggested Prozac. After going very holistic to beat a previous alcohol addiction Del refused the prescription because he did not want to use chemicals of any kind any longer. So the doctor told him that Prozac was not a chemical, but a mineral he was missing! Three weeks later he shot himself after kissing his wife as she left for the grocery store.

The one major issue that caught my attention in 1990 with this first SSRI antidepressant, Prozac, the mother of all SSRI and SNRI antidepressants, was the compulsion to drink alcohol. Living in Salt Lake City at the time I watched Mormons raised without any alcohol become staggering alcoholics almost overnight when given Prozac. Then as Zoloft was introduced we found it to be doing the same and such has been the case with all of these serotonergic medications since then. Someone who has a problem with alcohol should NEVER be given an antidepressant because of the potential of these drugs to produce these overwhelming cravings for alcohol!

Did Del’s use of Prozac bring those cravings for alcohol back making him think he could never overcome his addiction that he was so sure he had beaten leading him to lose all hope? The possibility is a strong one with more recent studies showing that almost half of those who take SSRIs after a problem with alcohol will INCREASE their drinking. Del’s wife did file a wrongful death suit and I have no doubt in my own mind (for many varied reasons) that case was settled by Eli Lilly and the doctor who lied to Del.

According to reports Robin Williams had recently been dealing with alcohol problems and went into rehab. Rehabs are notorious for prescribing antidepressants! I would hope his family would persue this and look for what really happened to Robin. If an antidepressant had been consumed this was not a suicide, but a premeditated murder! Warnings should be given for those who have had problems with alcohol or drugs in the past.

As for the Parkinson’s he was diagnosed with, I have no doubt that was caused by the antidepressants they had given him because Parkinson’s symptoms were the very first adverse reactions seen with the mother drug of all these antidepressants, Prozac. Antidepressants can cause all kinds of movement disorders, the worst being akathisia which is a Greek term meaning “can’t sit still.” It is also known to trigger suicide.

SAN FRANCISCO (AP) — Robin Williams’ autopsy found no alcohol or illegal drugs were in his body when he killed himself at his Northern California home in August, sheriff’s officials said Friday.

The results released by the Marin County sheriff’s office found that the actor had taken prescription medications, but in “therapeutic concentrations.”

The coroner ruled Williams’ death a suicide that resulted from asphyxia due to hanging.

Sheriff’s officials have said Williams was found in the bedroom of his home in Tiburon on the morning of Aug. 11. His death had been preliminarily ruled a suicide, with sheriff’s officials saying he hanged himself with a belt.

Williams’ wife, Susan Schneider, has said the actor and comedian was struggling with depression, anxiety and a recent Parkinson’s diagnosis when his personal assistant found him dead. 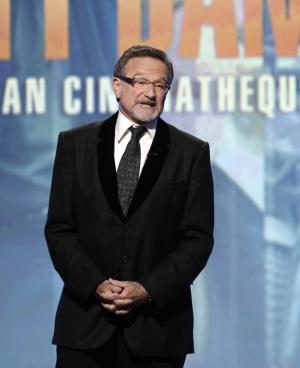 Williams had publicly acknowledged periodic struggles with substance abuse, and he had entered a substance abuse program shortly before his death. According to the coroner’s report, his wife told an investigator Williams did not go there because of recent drug or alcohol abuse, but rather to reaffirm the principles of his rehabilitation.

According to his wife, Williams was having trouble sleeping and had shown increased signs of paranoia before he committed suicide, the autopsy report said. Medical records confirmed he was diagnosed with Parkinson’s disease in November 2013 but had symptoms since 2011, including a left arm tremor and the slowing of left hand movements. Treatments with drugs in May 2014 led to some improvement, according to the report, and he remained physically active until his death.

Williams had two types of antidepressants in his system when he died, as well as a Parkinson’s medication, caffeine and another ingredient found in tea and cocoa, the autopsy found.

Authorities have said Williams was last seen alive by his wife when she went to bed the night of Aug. 10. She woke up the next morning and left, thinking he was still asleep elsewhere in the house.

Shortly after that, Williams’ assistant came to the home and became concerned when he failed to respond to knocks at a door. The assistant found the 63-year-old actor in a bedroom, according to sheriff’s officials. 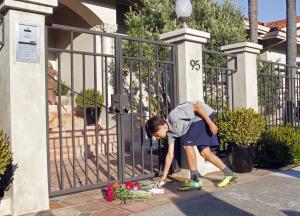 Williams also had superficial cuts on his wrist, and a pocketknife was found nearby.

The results of Williams’ autopsy, including the toxicology tests, were originally slated to be released Sept. 20. Marin County officials later announced a Nov. 3 release date, but the report was further delayed. Toxicology reports routinely take up to six weeks to complete.