Under current treatment for mental illness, man drives car into Christmas shoppers at 60 mph injuring 19. When I saw this early yesterday morning I mistakenly thought they must discussing the Melbourne case identical to this which happened last year about the same time and in the same place! Unlike the other case,  shockingly no one has died in this case as yet.

“We understand he is on a mental health plan
and receiving treatment for a mental illness,”
I have been alarmed by the high number of cases out of Australia as I have watched the news there closely over the past several tears. The answer why added up when I recently learned that 18% of the population there are on antidepressants. And a decade ago it was reported that 25% of their Parliament had admitted to being on the drugs as well! So considering those figures two cases like this happening just a year apart does not surprise me. And I hope everyoneis noticing that we are seeing vehicles used more and more in these cases. 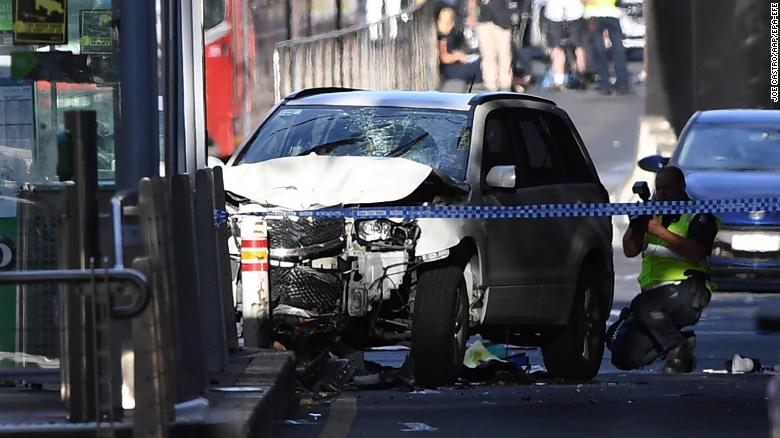 A damaged vehicle at the scene of an incident on Flinders Street, in Melbourne, Australia, 21 December 2017. The car, understood to be a white Suzuki SUV, ploughed into pedestrians in central Melbourne.

This is possibly the most deadly of all reactions one can have to antidepressants. Even more frightening though is to learn that before the introduction of the SSRI antidepressants RBD was known mainly as a drug withdrawal effect. Thus the chances of going into this dangerous reaction should be expected to increase as one goes into withdrawal. This is why it is so important to avoid as much of the withdrawal effects as possible by very, very gradually tapering off the antidepressant.

This RBD is the adverse reaction comedian Phil Hartman’s wife, Brynn, suffered causing her to shoot her famous husband while he slept just three weeks after her doctor cut her dose by half. The FDA issued withdrawal warnings along with the Black Box Warning for suicide the end of 2004. They warned that abrupt changes in dose can produce suicide, hostility and/or psychosis. With antidepressants the psychosis is almost always a manic psychosis referee to as Antidepressant  Withdrawal Mania. And far too many suffer this reaction thus earning themselves a label of “Bipolar Disorder” when in fact it is an acute toxic reaction brought on by the shock of the abrupt withdrawal and should subside. Instead most are led to believe they are Bipolar and are medicated for years for this adverse drug reaction. You can find an MP3 on this subject explaining detail how this happens and natural ways of treating it: https://store.drugawareness.org/product/bipolar-disorder-streaming/

We also have a Facebook group dealing with this reaction: