Skip to content
-
How very sad and tragic that these medical disasters continue to destroy the lives of so many celebrities, as well as many more in the general society, and NO ONE seems to know that medications have done this to any of them! Glen Campbell is sadly only one example of so many more.
FIRST THE ARIZONA DUI
Years ago when Glen was arrested in Phoenix for drunk driving they let everyone know he was on the antidepressant Lexapro (You can find that in our database of thousands of cases at www.SSRIstories.NET). Most important to consider in his arrest is that all of these serotonergic antidepressants – SSRIs and SNRIs – produce overwhelming craving for alcohol – even in those who have never touched alcohol before. And for those who had alcohol problems previously, these antidepressants so often given as “treatment” in rehab, have been shown in medical studies to increase drinking by 45%!
Did anyone explain that to Glen Campbell back then? Of course not! That would cut into their profits. I am sure they did as most doctors were doing – increased his dose or just switch to a different brand of the same kind of drug.
See our Facebook group “Antidepressant-Induced Cravings for Alcohol” for more info on the alcohol cravings:
https://m.facebook.com/groups/1688062138113514?
So in thinking the antidepressants were helping him he continued to use them as his various mental disorders worsened and changed from depression, to major depression, etc. He could have easily developed a Bipolar Disorder,  as so many do who take antidepressants since antidepressants induce Bipolar so rapidly, but if he did I missed that one while I was attempting to keep up with all the other tragedies caused by these drugs. 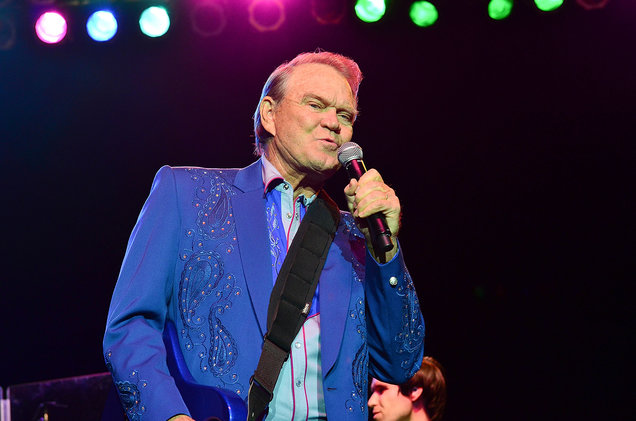 Now for years we have heard that Glen Campbell is suffering from Alzheimer’s. But what he and so few others remain completely unaware of is that these drugs which are designed to increase serotonin produce all the symptoms of Alzheimer’s while they slowly shut down every body system. The drugs affect memory sp strongly that Amnesia is a common side effect!
Alzheimer’s disease has long been known to be a condition of elevated serotonin levels. The gummy gooey glossy substance they know builds up in the brain is the same gummy gooey glossy substance they found built up on the heart valves of those who took the serotonergic diet pills Fen-Phen and Redux.
These diet pill heart valve issues wound up being one of the very largest patient damage suits in the history of the US due to that gummy gooey glossy gunk that built up on the heart valves preventing the valves from shutting properly.
And what was the cause of that gummy gooey glossy gunk? Wwll according to the Mayo Clinic study by Dr. Heidi Connolly it was elevated serotonin – exactly the action of the these diet pills which increase serotonin levels from two directions while antidepressants do so from one direction.
So does that risk remain a concern with antidepressants as well? Certainly it should although it should take longer to produce this adverse effect than the diet pills due to the antidepressants increasing serotonin via one direction, serotonin reuptake, rather than two directions as the diet pills did.

But what about the brain?

The brain damage was clearly associated with the elevated levels of serotonin in my opinion and this is why antidepressants designed to increase serotonin can produce that same brain damage which I have no doubt is what has happened to Glen Campbell over the years.

Is it just a coincidence that two of the states with the highest use of antidepressants, Florida and Utah, hold the two highest rates of Alzheimer’s?!!! Read this link to see how this same reaction affected Robert Redford’s Utah family very early on and could have ended the same way as Glen Campbell’s has…

ANTIDEPRESSANTS & MEMORY LOSS: Utah No. 2 in nation for Alzheimer’s

Please visit our Facebook group on that side effect of these drugs: “Antidepressant-Induced Alzheimer’s, Amnesia and Memory Loss” :

Glen Campbell IS NOT not dying of Alzheimer’s!

He is dying of antidepressant poisoning!

And if anyone knows how to reach him they could let him know that he does not need to die of Antidepressant-induced Alzheimer’s, but that does not mean it will not be a long road back with a long and gradual weaning process and then rebuilding from all the damage.

Go here to listen to him sing “Adios”…..

You can search for Glen’s earlier Lexapro case in our database of thousands of cases: www.SSRIstories.NET