Suspect in Pittsylvania Co. triple homicide is in custody

The suspect in a triple homicide in Pittsylvania County, Virginia, 19-year-old Matthew Bernard, ran toward a news crew while they were at a staging area — he also choked a church's caretaker. He was taken into custody shortly after. http://bit.ly/2U70l5P 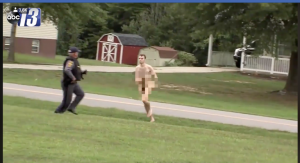 Last night in President Trump’s State of the Union address the one thing I was most grateful to hear was that he is going to ask Congress to make late-term abortions illegal nationwide, thereby overturning what just happened in New York & was attempted in Virginia.

For those of us familiar with the effects of these antidepressant & other serotonergic medications, like the anti-psychotic, stop smoking medications, headache medications, etc. are well aware of the fact that nearly every mother killing her child over the past 30 years was taking an antidepressant at the time. So hopefully you would also be aware that the rate of mothers milling their children BEFORE they are born is also very high. Hearing about young women giving birth to a baby & throwing it into the garbage or leaving it in a toilet to die was basically unheard of before the SSRIs as well. But when you are on a drug patients have long called the “I don’t give a damn!” drugs, drugs known to produce rage & extreme violence & homicidal ideation, & drugs also known to be found in 86% of the cases of REM Sleep Disorder where you act out your worst nightmare in a sleep state – the most deadly of sleep disorders long known to include both murder & suicide, why would that drug not also contribute greatly to the killing of hour child before it is born? We know these drugs produce “increased libido” as a side effect & nymphomania (manic sexual compulsions) which lead to the listed side effect of “unwanted pregnancy”. All of those adverse effects are certainly going to add to a higher rate of abortion. Please keep those thoughts in mind as you listen to Dr. Dave Janda’s comments on this issue below…so refreshing to hear a doctor comment with wisdom! You will appreciate his stand on their oath to “do no harm”…

Dr. Janda, I have not seen a better & more thorough response to this absolutely insane move by NY & VA on abortion laws. Both of my children are adopted & I have always been SO VERY GRATEFUL to their mothers for not choosing to abort their babies, but instead giving me the privilege of raising them as my own! They are my greatest blessing bringing more joy & wisdom than anything else ever possibly could! You are exactly correct in calling this what it really is “infanticide” – the worst form of murder – shedding the blood of the most innocent among us! I thank you & am sharing this with my several thousand followers now.

Impact of Antidepressants Upon Our Society

As some of the comments below stated, we are living out the nightmarish prediction laid out in George Orwell’s book, 1984. We are definitely there. My book on antidepressants first published in 1994 has a chapter asking the question, “In 1994 how far into 1984 are we?” An entire chapter showing how these drugs, with glaring evidence they were ordered by the CIA to replace the LSD Congress banned in 1966, would usher in Orwell’s all too real prediction of things to come. Understanding how these drugs affect the brain & behavior is critical in understanding how the drugs would usher in the 1984 scenario for this country & sadly now our entire world.

The Direct Attack Upon Christians

Satan knew exactly WHO to attack as Christian women have for some time now have become the highest users of these deadly drugs. And to my shock, I learned only two weeks ago that 1 out of 5 pregnancies end in abortion, while 1 out of 3 abortions performed were on church-going Christian women! The future of Christianity is clearly under full attack!

The article below on spirituality & sorcery was written at the request of a high profile reverend friend of mine & explains how antidepressants would cause this & how we were warned in clear terms in Revelations that this would happen:

On April 5, 1991, after only 21 days on Prozac Tucker Moneymaker’s wife Sandra, 36, shot and killed their two sons, David Lee, 8, and William, 16, while they slept before shooting herself twice in the abdomen in a suicide attempt. The bottle of Prozac was found in the room with them. Tucker had left for work at 7:00 AM and returned at 8:37 AM to find the boys dead and his wife bleeding and unconscious. Read below for the scientific data on how Prozac can cause murder/suicide.

And here is the text of Tucker Moneymaker’s testimony to the FDA on September 20, 1991:

MR. MONEYMAKER: Thank you. On behalf of myself and thousands of other citizens in the states of North Carolina, Virginia, and West Virginia, of which I happen to be the Prozac Survivor Director for these three states, I want to say thank you for allowing the public to come up here and speak and voice their opinion about this dangerous drug.

I also want to tell everybody that these are real stories, real people. This is not something written down on a piece of paper, something somebody wrote up somewhere. These are real things that are happening.

My story is also real. It’s just a real nightmare, something I have to live with every day. I had two sons, David Lee, age 8, and Billy, 16, a wife of 20 years, is all gone. I’ll tell you why. In March of this year my wife, Sandra, had some nerve problems. She was asked to go be evaluated. The doctor put her on Prozac. He told her she was depressed because she was having nerve problems.

Now, I want you to keep this in mind, how my wife was, just a little short story. My wife was the kind of mother that always put the kids first. She would take her kids back and forth to school every day. My 8-year-old never rode a school bus. My wife was tied up in the church, tied up in Cub Scouts and room mother at school.

I haven’t slept but about two hours since Sunday.

I want to apologize if I sound a little shaky. After being on Prozac for 21 days, my wife shot and killed both of these two boys right here. She turned the gun on herself and shot herself herself twice. Now she’s in jail for murder.

This is the kind of lady that never took a drug, no mixed drinks, no alcohol, no reason to be depressed, just some nerve problems, like everybody has from time to time. I’m depressed. I’ve got legitimate reason to be depressed. I want to ask you all, don’t let this happen to anybody else. These are real people. You know, these murders and things are senseless. It’s time to put a stop to it.

HOW ANTIDEPRESSANTS CAN PRODUCE MURDER AND SUICIDE:

There are several ways. First of all they impair the metabolism of serotonin so that serotonin will build up in the synapse. And we were suppose to believe that was beneficial. But take a look at this research from the University of Southern California on excess serotonin producing extreme violence: http://www.drugawareness.org/mutant-mice-key-to-human-violence-an-excess-serotonin/

Another way it can be done is by inducing the REM Sleep Disorder (RBD) – a state in which one acts out nightmares and which has long been known to include both impulsive murder and suicide. At this point 86% of those being diagnosed with this disorder are taking antidepressants. Because of the time of day this case happened it would most likely be triggered by RBD.

Another way they can induce this type of violence is by chemically inducing a manic psychosis. In the beginning of the SSRI antidepressant era psychiatrists refused to prescribe Prozac due to its strong ability to induce mania/Bipolar Disorder. That is far from the case now though.

drugawareness.org & ssristories.NET
Author: ”Prozac: Panacea or Pandora? – Our Serotonin Nightmare – The Complete Truth of the Full Impact of Antidepressants Upon Us & Our World” & Withdrawal CD “Help! I Can’t Get Off My Antidepressant!”

WITHDRAWAL HELP: You can find the hour and a half long CD on safe and effective withdrawal helps here: http://store.drugawareness.org/ And if you need additional consultations with Ann Blake-Tracy, you can book one at www.drugawareness.org or sign up for one of the memberships in the International Coalition for Drug Awareness which includes free consultations as one of the benefits of that particular membership plan. For only a $30 membership for one month you can even get 30 days of access to the withdrawal CD with tips on rebuilding after the meds, all six of my DVDs, hundreds of radio interviews, lectures, TV interviews I have done over the years PLUS access to my book on antidepressants (500 plus pages) with more information than you will find anywhere else (that is only $5 more than the book alone would cost) at www.drugawareness.org. (Definitely the best option to save outrageous postage charges for those out of the country!)